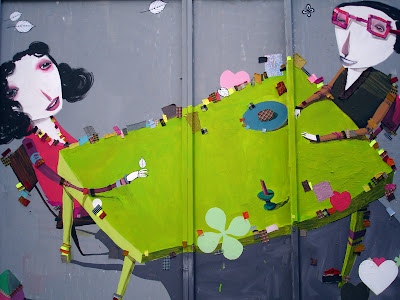 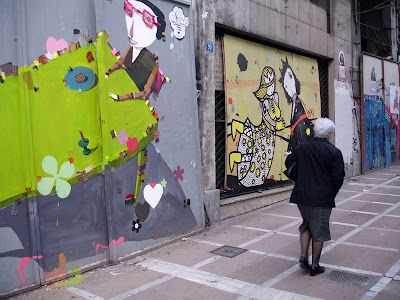 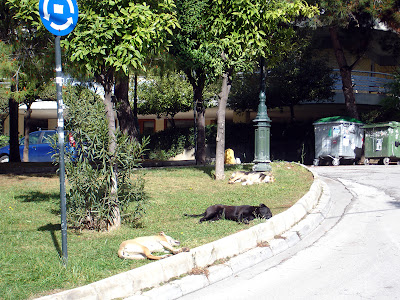 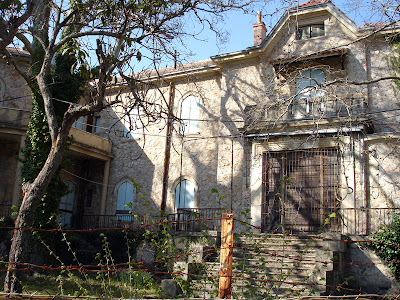 These stairs lead to the room where the King's office used to be. Many photos in Greek magazines featuring "family" moments of the royals in the 50's and '60s had the family sitting on them.
(See also previous posts)
Posted by Ovelikios at 11:39 PM 5 comments: 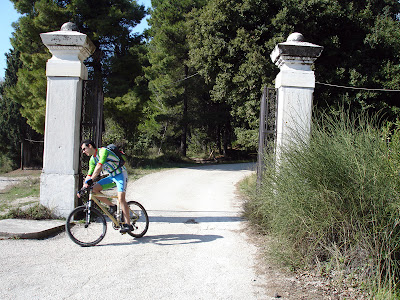 This gate was the official entrance to the palace proper in Tatoi (see previous posts). On the right (not visible) is what remains from the guard's outpost. From this gate would pass every official visitor and on this spot stood the tanks which blocked the palace during the coup d' etat in 1967. (That is, until the moment when the King accepted their "government").

Today the estate is completely accessible to the public (except from any building) and is recommended trip for everyone visiting Athens.
Posted by Ovelikios at 6:24 PM No comments: 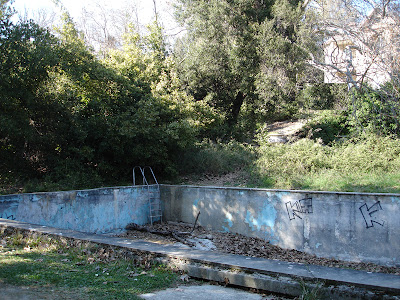 I wonder how many royals had dived in this swimming pool in the former royal palace in Tatoi. Now it's full of leaves and some graffiti.
Posted by Ovelikios at 10:47 AM 13 comments: 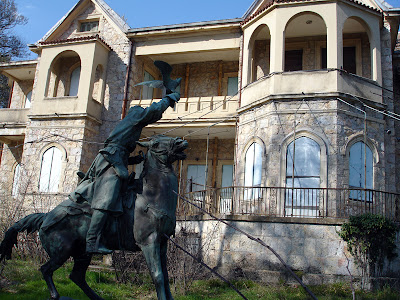 This is where the ousted Greek royal family lived from 1871 to 1968. The palace is part of a large property, now confiscated by the state. The building is empty. Most objects, artifacts and precious items were taken by the former King over the years and many of them were auctioned in London some weeks ago.

The place is more than 15km out of Athens and is now part of Parnitha National Park and the whole area is open to the public. I, actually, met many tourists walking the area and many families trekking. The palace and all the other buildings are closed though.

Read more in Wikipedia
See the area in Wikimapia
Posted by Ovelikios at 11:58 PM 5 comments: 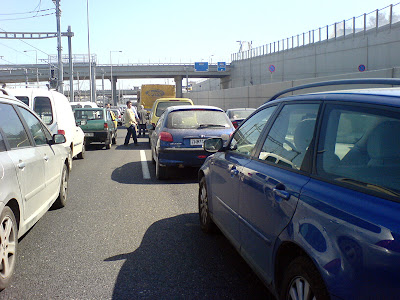 This is Attiki Odos, the newest and fastest freeway in Athens. Today, it was just a an endless queue of cars due to Vladimir Putin´s visit. This road leads to the airport so the authorities saw it proper to close it entirely for 30 minutes till the motorcade of the departing Russian president reaches Athens Intl. 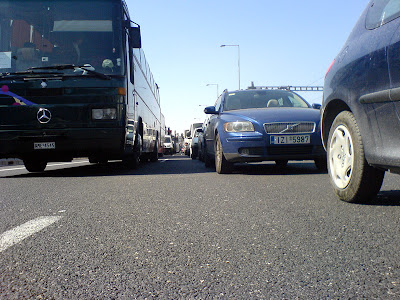 Well, it was an opportunity for the drivers to have a little socializing under the sun.
Posted by Ovelikios at 2:48 PM 1 comment: 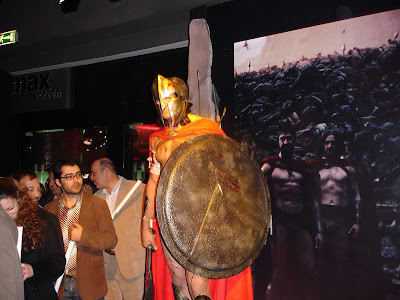 Two days before the official release in Greece, the movie about the battle of Thermopylae was screened in a grand premiere in Athens. A whole multiplex (14 cinemas, about 2700 seats) was dedicated to Leonidas and his 300 men who fought the Persians in 480 B.C.

Of course, the movie is based on the "300" comic book which is loosely based on the actual battle. Some in Greece will yell against the "distorted history" but, well, it's just a movie.

P.S. 2
Look how King Xerxes looked like and how he is depicted in the movie. Good thing this will never be released in Iran. :-)
Posted by Ovelikios at 11:11 PM 5 comments:

A ride on the mountain 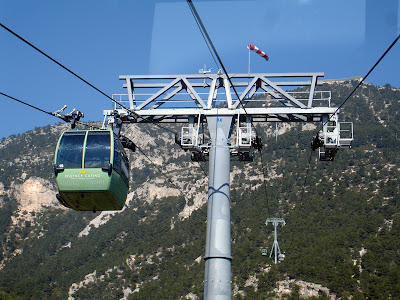 This is the teleferique of the Parnitha mountain. It lifts people to the Regency Casino (former Mont Parnes Hotel, alt. 1055m). It is brand new. The previous lift that was there for over 40 years was dismantled. Parnitha is the tallest mountain in Athens and is a protected forest and wild life area.
See the area in Wikimapia
Posted by Ovelikios at 5:28 PM 6 comments: 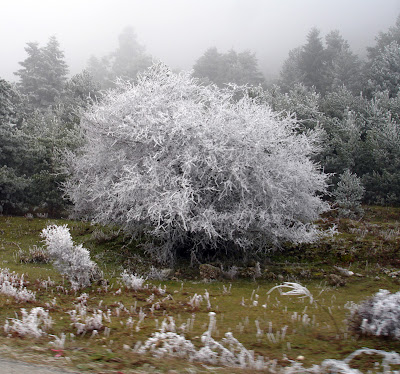 First day of spring today. For scenes like this, we 'll have to wait till next winter (at least in this part of the world).
Posted by Ovelikios at 10:53 AM 7 comments: