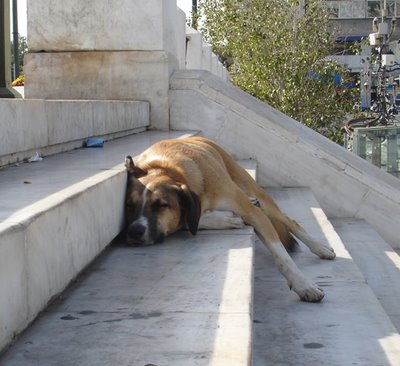 ...I should be sleeping like this dog.
exact place on the map
Posted by Ovelikios at 10:50 PM 6 comments: 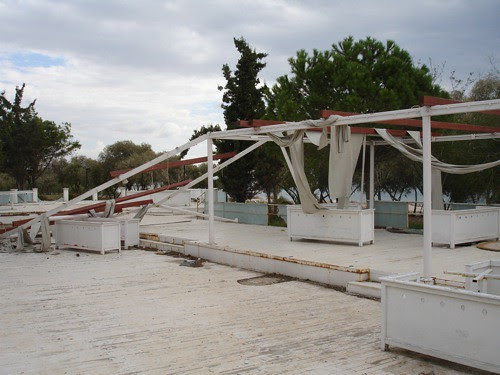 This abandoned nightclub used to be one of the hottest spots of seaside Athens. Now it lies in ruins, apparently because there were problems with permits or noise restrictions or the owner just didn't get his money back. 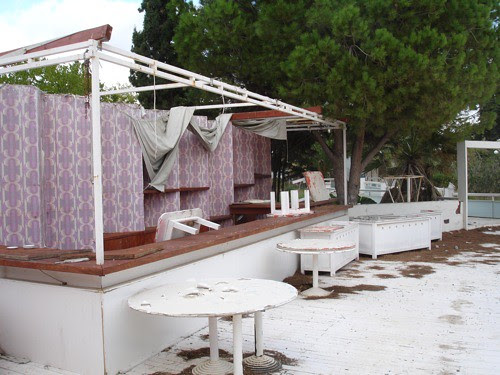 Most of the seaside nightclubs have problems with the law, most of the times is a matter of "who you know" in order to "circumnavigate" the rules.
Show me where it is
Posted by Ovelikios at 12:32 AM 7 comments: 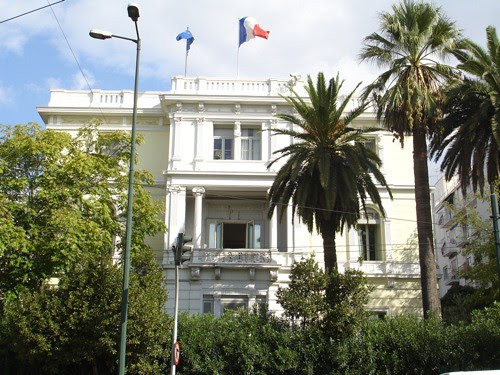 Eric, and the rest of my French friends, this is for you. This magnificent building, over 120 years old, houses the french embassy. The mansion has a very interesting history, you can read all about it in the embassy's webpage.
L’Ambassade de France à ATHENES (in french)
Το κτίριο της πρεσβείας (in greek)
Where is it on the map? (mouse over the yellow square) 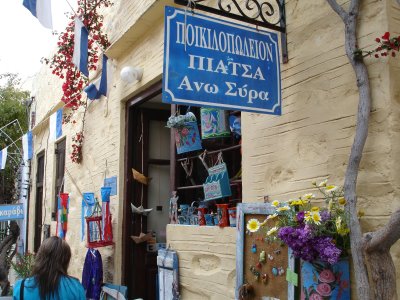 Ano Syros is a medieval town, the historical capital and oldest settlement of the island.
See the exact spot where this photo was taken 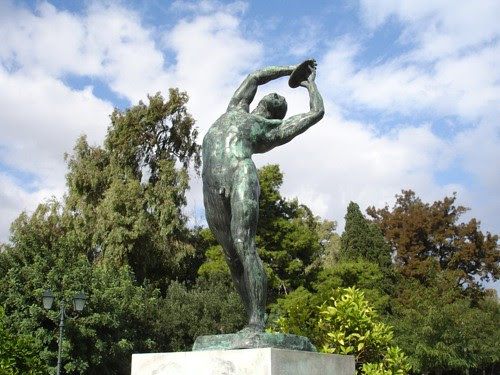 The bronze Discus Thrower statue is just opposite from Panathinaiko Stadium (see previous post) and was erected in 1927. One replica of this statue was installed in Paris during the 1924 Olympic Games. Later it was transferred in New York City's Central Park and later in Randalls Island park. That statue was vandalized and needed restoration (see photos). This one is doing just fine (except from the rust).
See the exact spot where this photo was taken
More information about the "american" statue
Discus throwing in Wikipedia
See the area in Wikimapia
Posted by Ovelikios at 12:54 AM 6 comments: 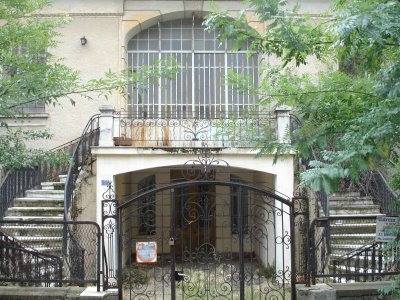 This is a house very close to where I live. I walk by often and I like it very much. Nobody lives inside. I wonder what its fate will be.

What is Adam Sandler doing in Piraeus? 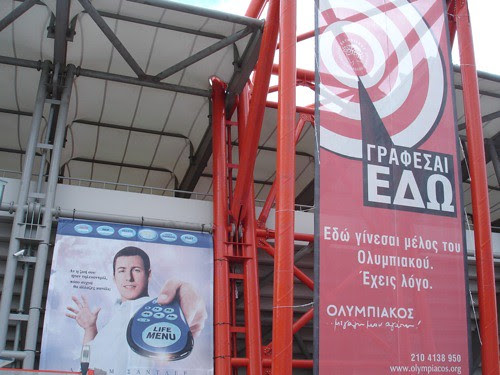 This is the side of Karaiskakis Stadium, home field of Olympiakos F.C.
The banner on the right calls for fans to become (paying) members of the club. Something like shareholders minus the shares. The poster on the left is Adam Sanlder trying to change channel now that the team is losing match after match.
An (outdated) satellite photo from wikimapia with the stadium still under contruction. It must be spring of 2004. 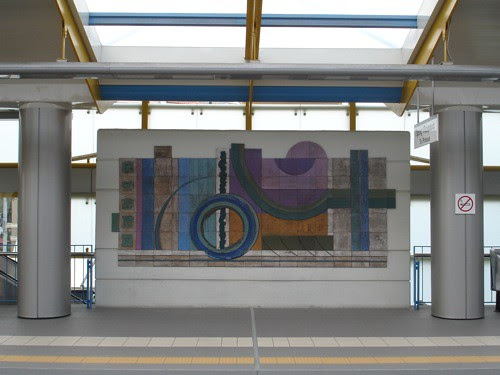 Several pieces of art found home inside the rennovated metro stations. Almost every station has something. I plan an expedition some day to shoot them all. (but I won't shoot the deputy, loll)

P.S.
I 've been a little incosistent and "lost" some days. Today I publish three posts. Hope this compensates for the lost days...
Posted by Ovelikios at 1:17 AM 3 comments:

Another kind of guard 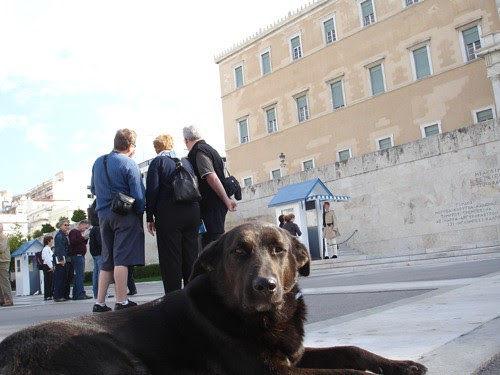 Not only evzones guard the tomb. I wonder what he would look like with a foustanella. :-) 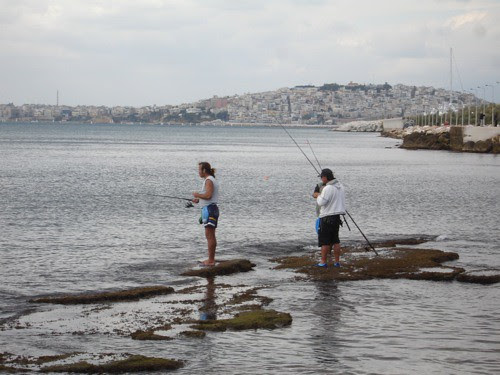 At Faliro beach, south of Piraeus.
See where this photo was taken
Posted by Ovelikios at 1:13 AM No comments:

Evzones and the unknown soldier 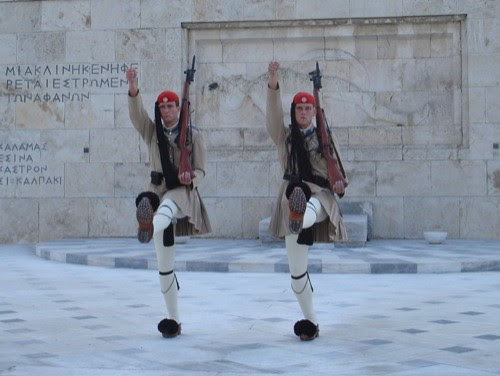 A classic tourist theme from Athens. The tomb of the unknown soldier, just in front of the parliament. Tourists find very amusing the "foustanela" that the guards wear, they call it "skirt" and they make immoral jokes about it. Well, they might say similar things about the Scots' kilt, at least the Greeks wear something beneath their foustanela.
Posted by Ovelikios at 9:46 PM 8 comments: 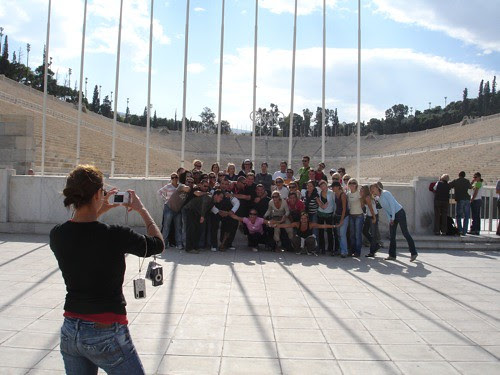 A company of friends, students probably, are enjoying their time in Athens. The girl took as many photos as has cameras hanging on her hand.

I wonder if any of them will come across this blog. That would be cool...
Posted by Ovelikios at 9:29 AM 1 comment: 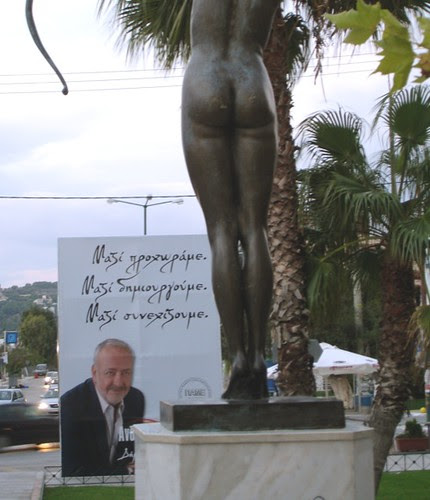 Where exactly was this photo taken? 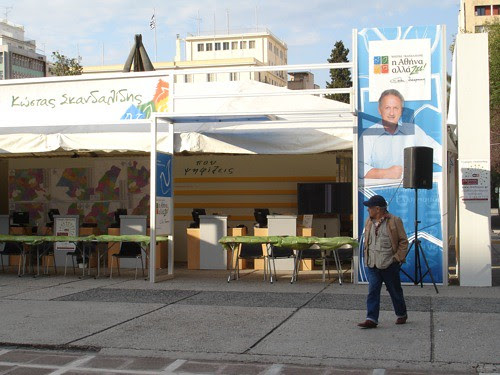 Athens is electing mayor tomorrow, so every square is full of kiosks which call to vote for one or for the other. 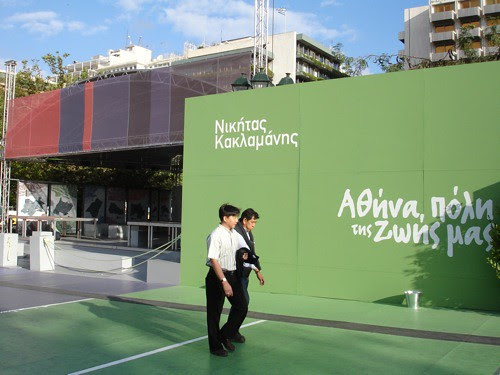 It's early in the morning so the only people in Syntagma (Constitution) square are some Asian tourists and me :-) 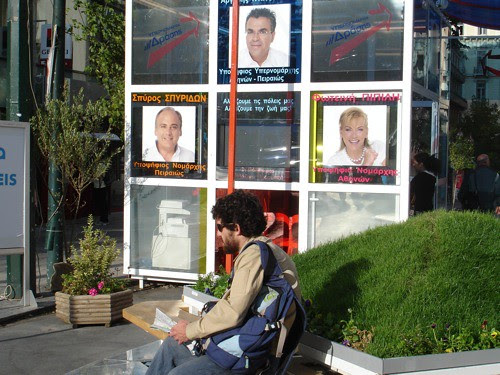 This guy here tries to find his way on the map while the three candidates for the prefect position (two of them are journalists) are smiling at him. Of course, he couldn't care less.

All over Greece, this Sunday people are voting for mayor and prefect. Most of them they couldn't care less too. The central government (i.e. the prime minister) holds most of the power and the municipalities' only job is to organize concerts and collect the garbage.

However, the mayor position is considered the first major step for a politician who wants to end up in the Parliament or the government. Athens' last two mayors are today ministers for Foreign Afairs and Health.

In Paris, things are even better. Almost every mayor ends up President. Am I right, Eric?? :-)
Posted by Ovelikios at 9:47 AM 5 comments: 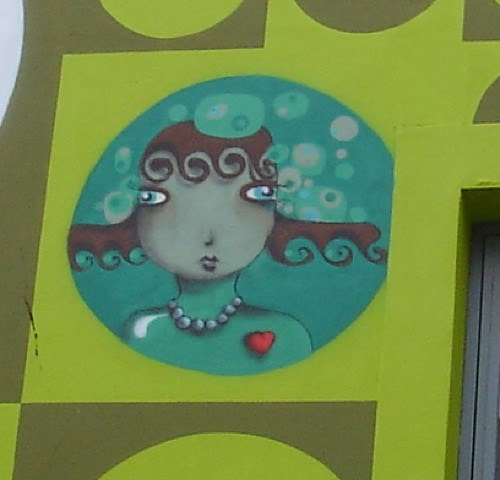 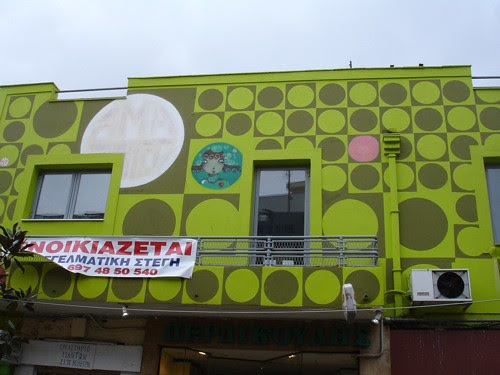 Temple of Poseidon at Sounion 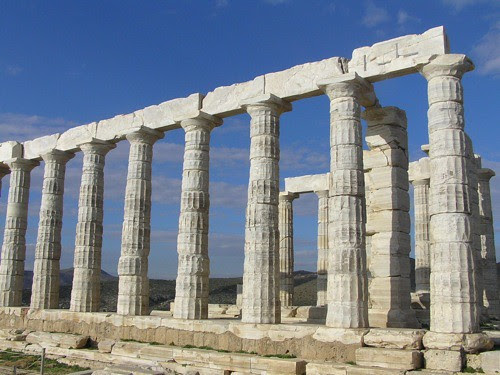 Sounion is on the southern tip of Attica region and the temple of Poseidon is one of the most significant ancient monuments in the country. My friend, Jerry, (who says he´s fed up with the animals in ADP) went there and sent me two pics.

Legend has it that Aegeas, King of Athens and father os Theseus, dived to his death from this spot into the sea when he thought, wrongfuly, that his son was dead after a fight with Minotaur in Crete. The sea was named after him, Aegean Sea. 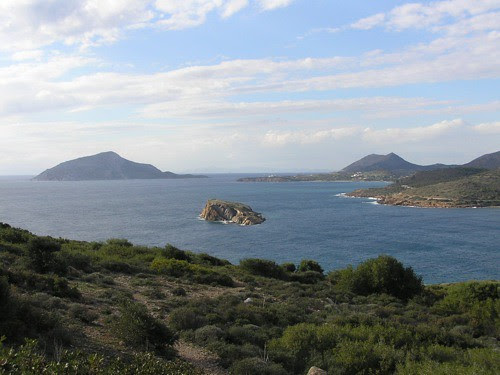 From here, you can see most of the Aegean islands that lie near Attica. The English poet Lord Byron carved his name onto one of the columns.
Sounion at Wikipedia
Sounion at Google Maps (the temple is just outside the hi-res area)
Posted by Ovelikios at 9:23 PM 6 comments:

The fiercest of animals 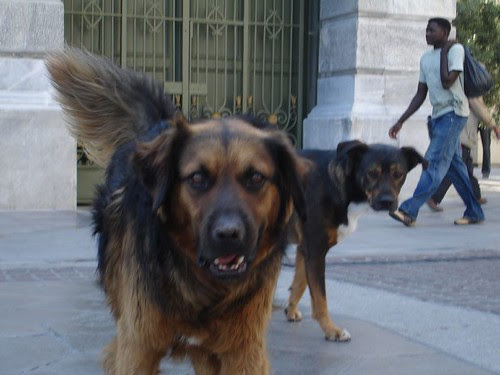 "No paparazzi!!", the angry dog said to me, sending a clear message of what was about to happen if I wouldn't comply. Well, the truth is that this dog was not at all angry when we met, he was mostly curious. 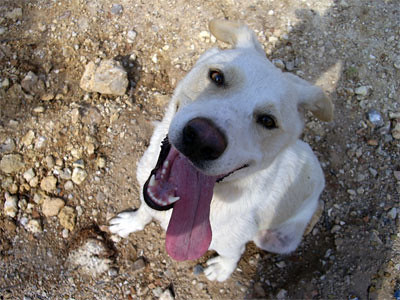 Devious Diva (visit her blog) sent me this cute dog that seems so benevolent, he looks like Odie, the Garfield's friend 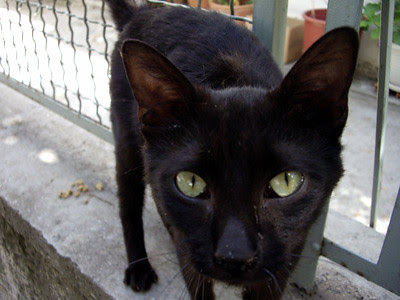 In Greece, meeting a black cat is considered bad luck. If you come across one in the morning, all your day is ruined. I know that the same thing is believed in many countries. What about yours?
Posted by Ovelikios at 7:58 PM 9 comments: 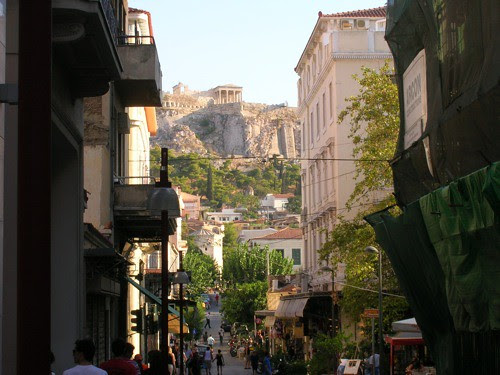 Athens DP correspondent Stefanos, sent me this magnificent photo of a Plaka street with the Acropolis rock in the background. or should I say...upground :-) . The pic was taken by a Spaniard friend of his.

It's August 16th, the streets are almost empty, it's the best time for one to visit Athens. With lots of water to drink, that is. :-)

Stefanos, many thanks.
Posted by Ovelikios at 12:21 AM 6 comments: 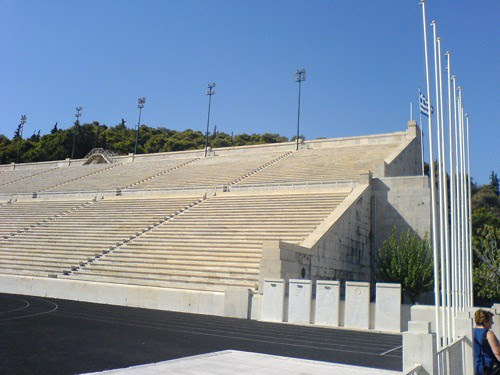 This is where the Olympic Games of 1896 were held.

The stadium was first built in ancient times and was remade in marble in 329 BC. By 140 AD was mostly as you see it today, with capacity over 50.000 people.

Unfortunately, wars, uncivilized conquerors, raging enemies and (eventually) time almost completely destroyed it. It was remade once more in modern times to host the 1896 Olympics. 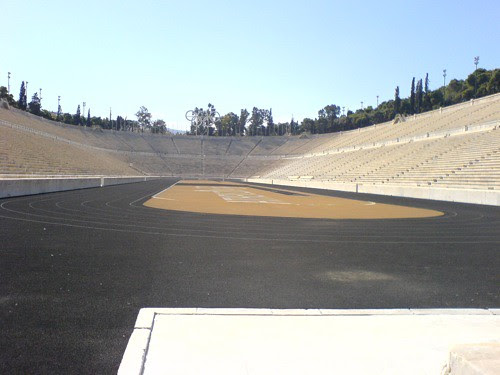 In the 2004 Olympic Games, the Panathinaiko Stadium hosted the archery competition, and served as the finish site for the men's and women's Marathon races.

Panathinaiko Stadium in Wikipedia
Posted by Ovelikios at 11:22 PM 5 comments: 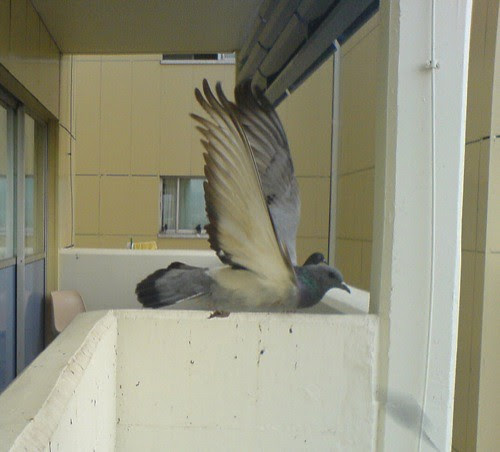 It seems that pigeons are becoming (along with old buildings) one of this blog's favorite themes. Maybe because they give me some lucky moments like this.
(Here is the first pigeon lucky moment)

P.S. to fellow city photobloggers: Although Athens is full of taxis, I didn't have the chance to photograph one of them. Sorry for not participating to the "Theme Day" for once more. Maybe on November 1st.
Posted by Ovelikios at 8:41 PM 10 comments: