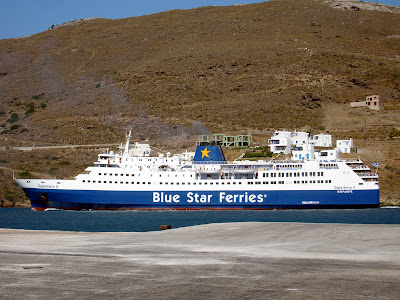 The houses on the hill seem to blend beautifully with the ship's white deck. Scenes like this make me love the greek summer.
Andros island, main port.
Satellite photo
The same boat outside Tinos island
Posted by Ovelikios at 9:23 PM No comments: 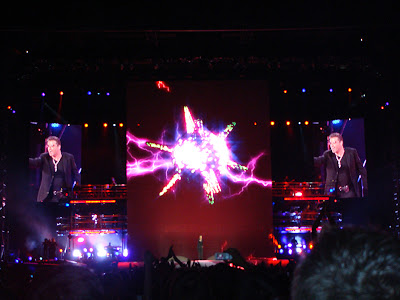 Last Thursday, George Michael gave a big concert in Athens Olympic Stadium in front of 40.000 spectators. It was the last concert of his european tour and one of the best events of the summer for Athens. 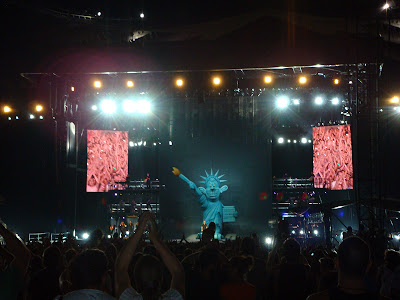 Many thanks to Annika for the photos.
Posted by Ovelikios at 4:06 PM 8 comments: 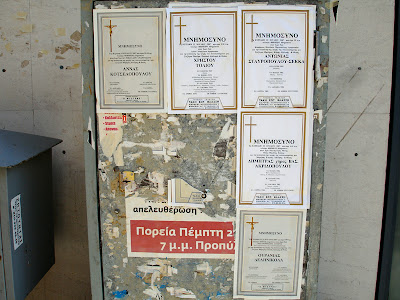 These are death notices on a telephone company´s switchbox. In Athens there are no designated areas for such announcements so everyone uses walls, poles and any suitable surface.

It´s common that you can stick your notice or poster on other people ones, last week here was an anarchist movement´s poster, next week..who knows?
Posted by Ovelikios at 8:35 PM 6 comments: 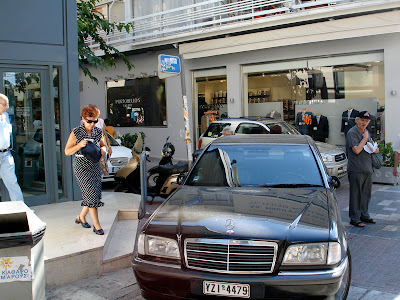 This area is supposed to be pedestrians only. As you can see, cars are parking even in front of the entrances. 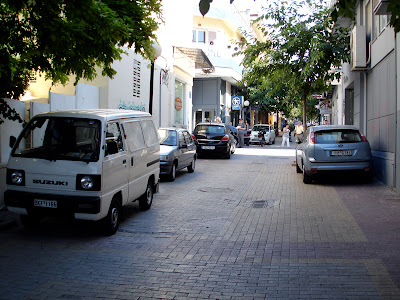 The municipality police is nowhere to be seen. So,  the pedestrian's area is turned into a parking lot. Of course, none complains. Everybody wants to park his car right on the front of his store. 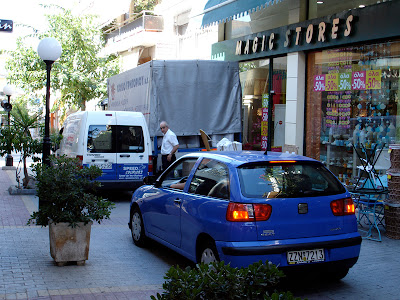 So, everyone passes freely from there. They even horn at you when you dare to walk. No surprise none wants to shop at this particular area and the shop owners are complaining. Well, you do can shop there. As long as you are Indiana Jones.
Posted by Ovelikios at 8:37 PM 6 comments:

A tail and a tower 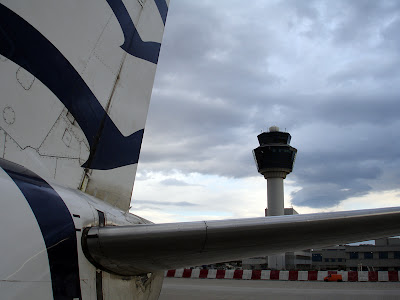 I took this photo seconds before boarding in an Aegean Airlines plane to Rome, at Athens airport.
Athens airport satellite photo
Posted by Ovelikios at 10:50 PM 1 comment:

Old Parliament and a hero 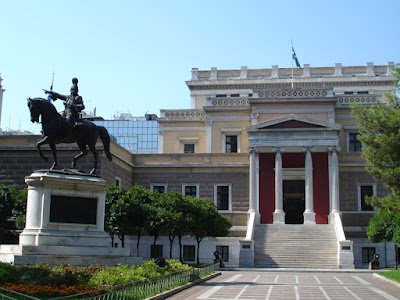 This is where the Greek Parliament was from 1875 to 1935. The equestrian statue on the front is Theodoros Kolokotronis, the most prominent figure of the Greek Revolution of 1821.
The building now houses the National Historical Museum.
See the place in Wikimapia
Read more about the site
Posted by Ovelikios at 9:32 PM No comments: 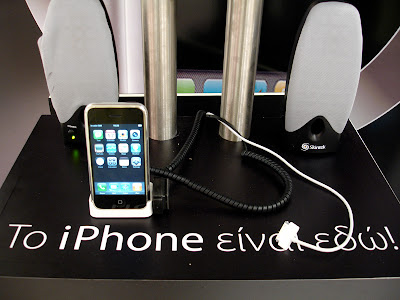 ...well, not exactly. A fully functional piece (although with no SIM card and no EDGE network) is displayed at "Plaisio" computer shops since last Friday and many people have been waiting in line to hold it and play with it. I was out of town for the weekend so I couldn't take photos of people posing with it for their friends.
I went there today, early in the morning of course, and I played with it for 15 minutes or so. It's the most impressive device I 've ever held.
iPhone will not go for sale in Greece (and, of course, in Europe) before Christmas but the sign in front of the device reads "iPhone is here!" They should have put some Santas and elves there. :-)
Plaisio stores
iPhone homepage
Posted by Ovelikios at 11:05 AM 6 comments:

Protesting for the forest 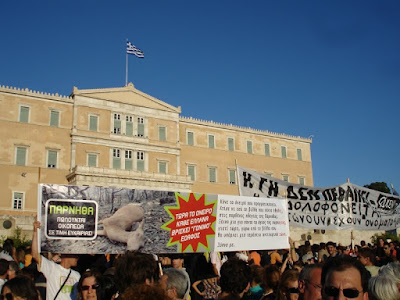 Today, the first ever large environmental protest took place in Athens. People are so fed up with the ineptitude of the state to protect the forests and the environment that they gathered outside the Parliament to protest. 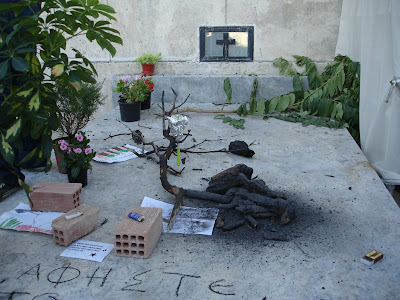 On the very tomb of the Unknown Soldier, protesters left ashes and burnt branches from Parnitha, cigarette lighters and some bricks (symbolizing arson and the subsequent building of the burnt places).

Last week, Parnitha mountain's forest, the one and only national park in the vicinity of the capital, was lost due to a huge wildfire. No emergency plan was carried out, the forest is now gone and the minister in charge of the fire brigade said that the operation was "relatively successful"...
Read more about the protest
Posted by Ovelikios at 11:48 PM 3 comments: 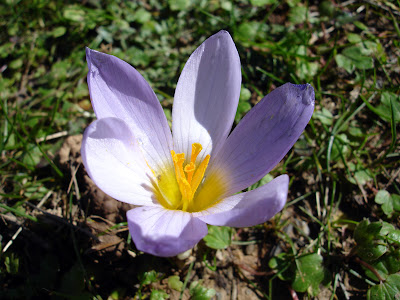 I took this photo in Parnitha, a few weeks before the fire, at a place that is now burnt.
The aftermath
Posted by Ovelikios at 11:05 PM 3 comments: